Madagascar is one of the world’s most renowned zones of biological diversity, with most of this diversity found in the island’s wetter evergreen forests.  Human population growth has led to severe deforestation and forest degradation, in large part due to the continued use of tavy (slash-and-burn agriculture) for upland rice and food crop production.  Farmers are aware of the degrading effects of tavy, which exposes fragile soils to erosion and productivity losses, but often feel powerless to redress the situation in their struggle for survival.  Madagascar’s rainforest ecosystems have shrunk to about 10% of their original extent with remaining patches of natural vegetation increasingly reduced to isolated habitat islands in a matrix of agricultural land.  In such fragmented landscapes, ecological degradation resulting from agriculture cannot be stopped solely by conservation measures; it will also require more intensive agricultural systems that increase production without undermining production potential. Equally true is that intensive protection of isolated reserves is an inadequate strategy to preserve desired levels of biodiversity.  Ecoagriculture is defined by Scherr & McNeely (2007) as “integrated conservation-agriculture landscapes where biodiversity conservation is an explicit objective of agriculture and rural development and the latter are explicitly considered in shaping conservation strategies”. 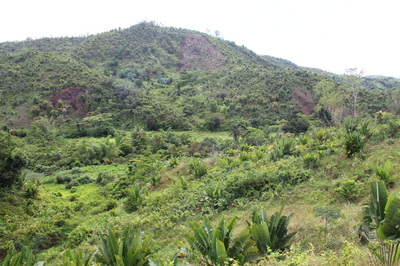 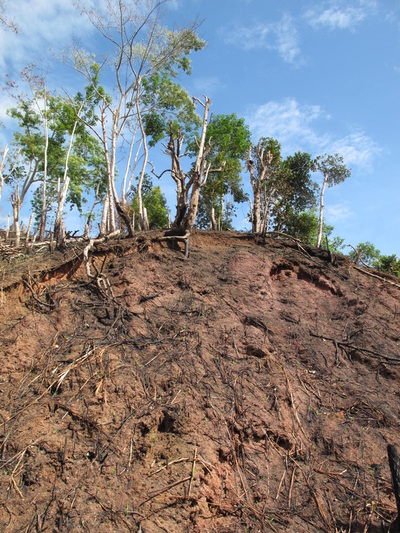 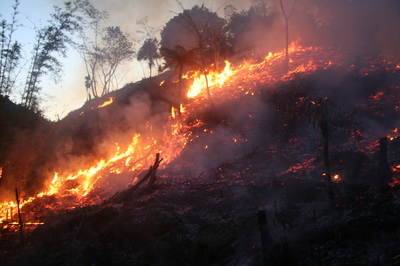 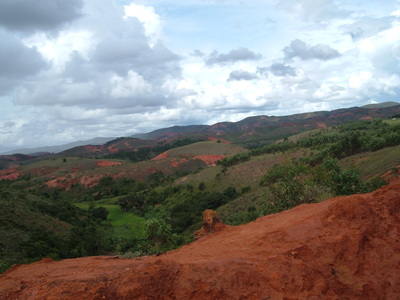 ﻿To initiate a more comprehensive and ecologically oriented approach to improving farming practices in the Toamasina Region, the MFG partnered with Dr. Christof den Biggelaar, Associate Professor at the﻿ Goodnight Family Sustainable Development Program, Appalachian State University, North Carolina ﻿and applied for an American Association of Zoos and Aquariums CEF grant (Ecoagriculture Curriculum Development, Training and Research at the MFG’s Ivoloina Conservation Training Center and the University of Toamasina, Toamasina, Madagascar) which was awarded in September 2006.  The following January Christof took a six month sabbatical aimed at building local capacity through both formal and non-formal education initiatives. To achieve development of a formal program, the MFG and Christof built a strong relationship with the University of Toamasina's Department of Natural Resources (GRENE) to create an ecoagriculture curriculum  and taught an intensive one-week course on Agroforestry and Soil Conservation.  ﻿ 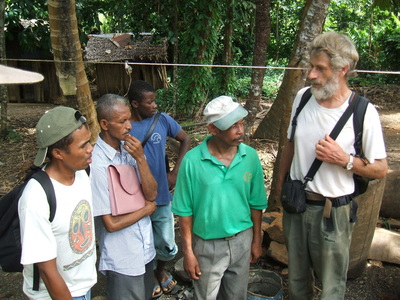 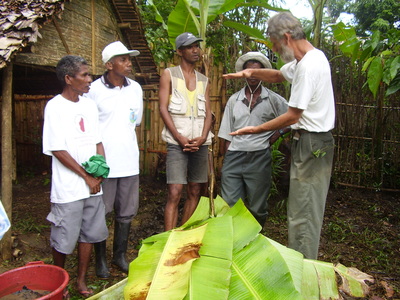 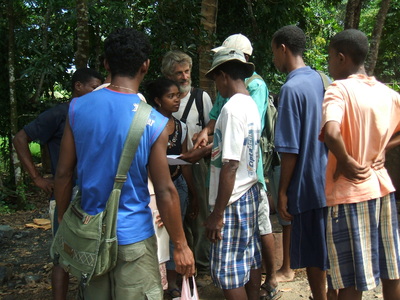 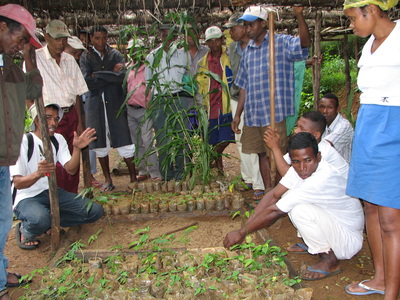 Before offering workshops, Christof met with local villagers to gain a better understanding of their farming practices which, as he points out, evolved from the community’s collective knowledge acquired over generations. He places great value in examining existing practices and experimentally modifying aspects that may improve performance as opposed to retrofitting technologies developed in other countries.  A universal problem faced by Malagasy farmers is soil infertility yet, although composting is one of the easiest and best methods to restore organic matter and nutrient levels, few farmers made compost.  To encourage the practice, Christof and the MFG team used readily available biomass (leaves, grasses, crop and kitchen wastes, manure) to test different compost combinations and production techniques. The nutrient status of soil before and after the addition of compost was analyzed at the ICTC lab and information on mixtures identified as best able to meet local nutrient deficiencies was shared with farmers during site visits, at Parc Ivoloina and in training workshops.  Christof also helped farmers and the MFG staff improve the quality and production of tree seedlings by root pruning, using elevated and ventilated seedling tables, fertilizing seedlings with compost teas and identifying appropriate pretreatment methods to boost germination rates of seeds. 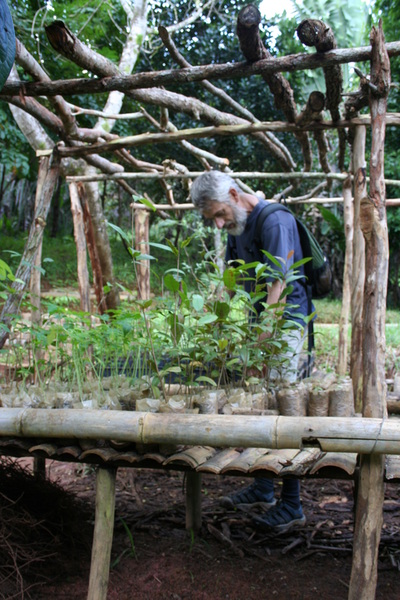 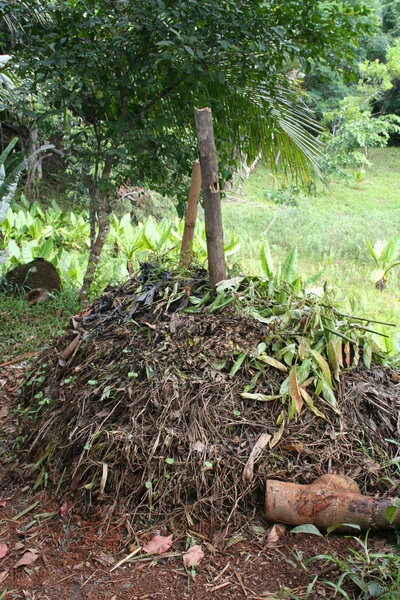 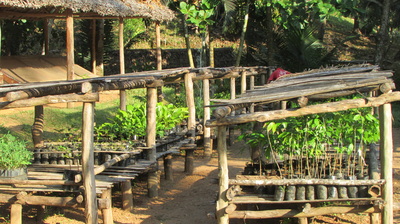 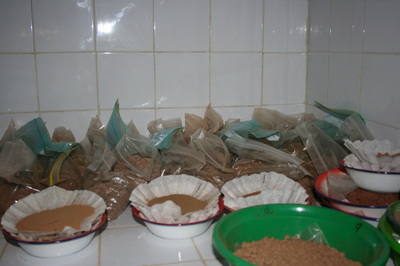 Christof dedicated a significant portion of his time working with the MFG staff and providing them with hands-on training so they could continue the program.  Because the education system in Madagascar places more emphasis on memorization and little on problem solving, Christof's discussions also include looking at the big picture and remembering that natural resource management and ecoagriculture research require a long time horizon, particularly when research involves trees that take time to grow before their benefits (erosion control, biomass production for green manure, secondary products such as fuel wood, bee fodder, animal fodder, etc) and potential inconveniences (primarily competition for water, nutrients and light) can be assessed.  Unanticipated events may force changes in management or research plans but, in reality, this is often experienced by farmers, and should not be seen as a failure but simply as a need to redirect the question to fit the current conditions.  He emphasizes that they should combine their knowledge and skills with curiosity and courage to not be shy about problems, mistakes and negative outcomes but to see them as opportunities and lessons learned.

Christof has returned to Toamasina every year since 2007 including a second sabbatical in 2013. Christof's 2007 team included Lala Randriatavy who is now working on his PhD (control of invasive strawberry guava in Betampona Natural Reserve), Christian Rambeloson (center photo sitting) who is now MFG's Ecoagriculture Program Manager, Veronique Ravololonarivo who is now the MFG's ICTC Lab Manager and Jean Francois who is now Supervisor of the Forestry Station. 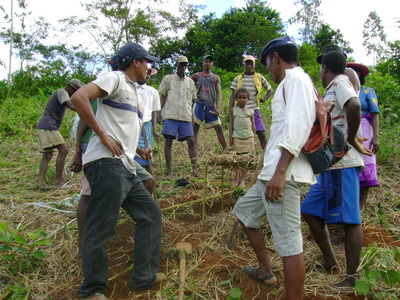 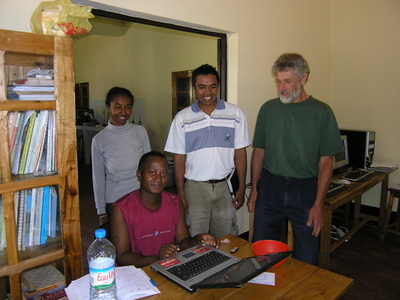 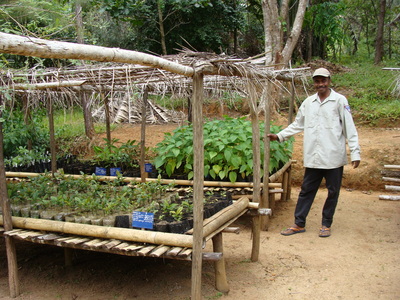 Christian's goal for the Ecoagriculture Program is to "promote ecoagriculture techniques to ensure sustainable development and rural food security while conserving biodiversity in eastern Madagascar". His objectives include:
1. Reaching out and providing farmers with training in the use of improved ecoagriculture techniques to increase food production.
2. To carry out applied research on issues such as improving soil fertility, the efficacy of different nitrogen-fixing native plants, etc.
3. To encourage the creation of local markets where farmers who have expanded the variety of vegetables they grow can sell their produce. 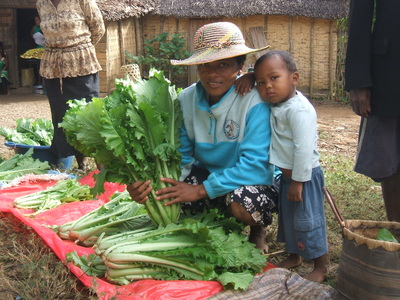 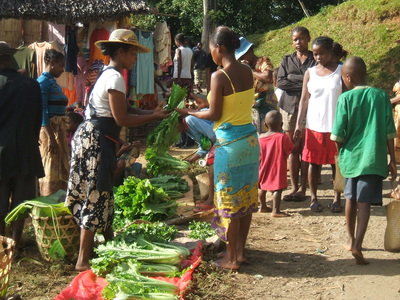 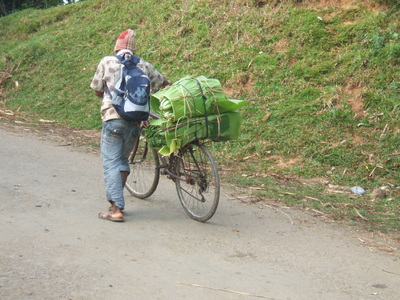 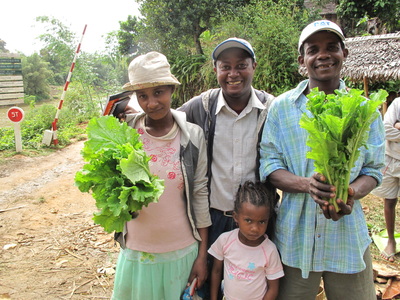 With the help of Christof, MFG's Model Station underwent significant improvement to become a true demonstration, research and training site.  However, the team is aware that whatever works well on the station often doesn’t work in the real world, as farmers do not have the resources, nor the level of control and attention directed at their plots.  Therefore, Christian works with individual farmers to have "feelers" in the farm community and thereby learn about farmer issues, get feedback on what they learned and took from training they have received, offer help and assistance to farmers to make improvements, and, also learn techniques from farmers that can inspire future research or demonstrations at the Model Station.

Over the last few years Christian has been working with "leader farmers"; leaders in that they are open to trying new ideas and, if the ideas prove beneficial, other farmers will be more interested in trying them as well.  The above photos show a farmer-leader with Chinese cabbage, a new crop she grew as a cash crop. The results have been positive; her customers include local families and "middleman" who is transporting the cabbage into Toamasina where he can sell it at a profit. 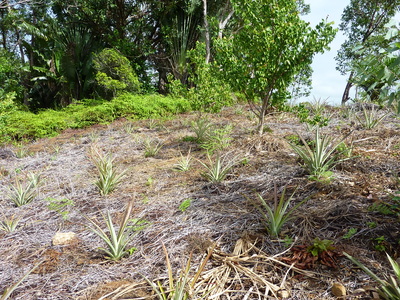 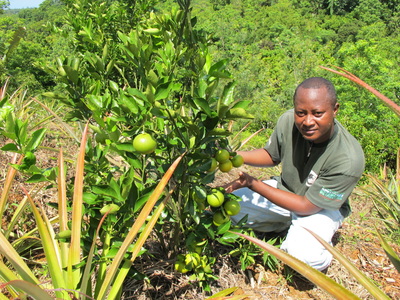 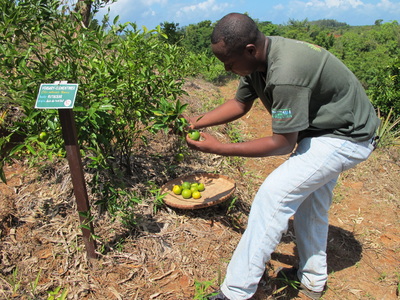 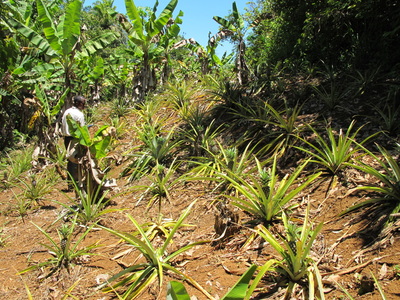 The fruit trees were planted in 2007 and the pineapples were planted in-between fruit trees in 2009.  All species have produced fruit. Some citrus and corossol trees died and, although all trees were planted in the same manner, soil tests revealed variable nutrient levels throughout the slope. To date, the primary lesson drawn from the experiment is that it is possible to recover a degraded, acidic, fern-covered hill slope and convert it to a productive fruit orchard. The key factors contributing to the successful conversion were sufficiently large plant holes, lots of compost, mycorrhizal inoculation at planting, mulching, regular weeding and pest scouting. 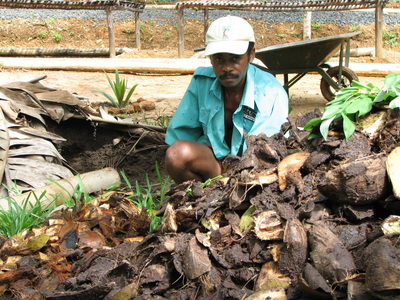 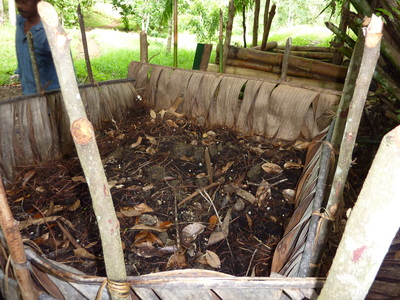 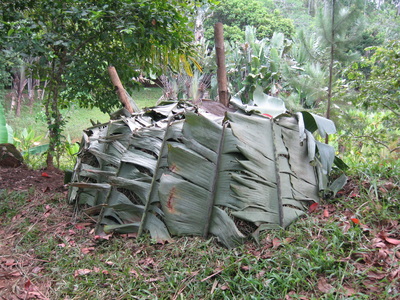 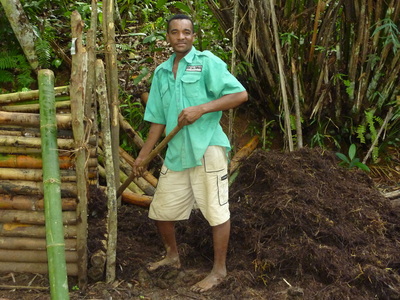 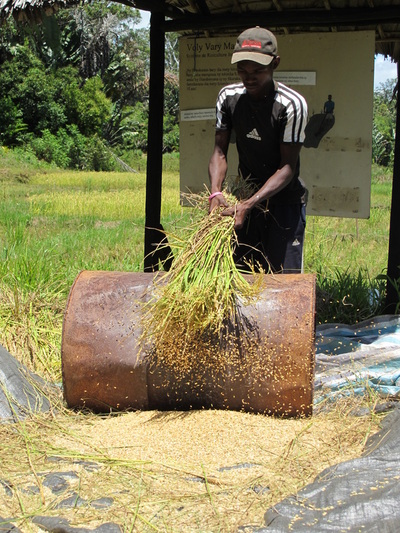 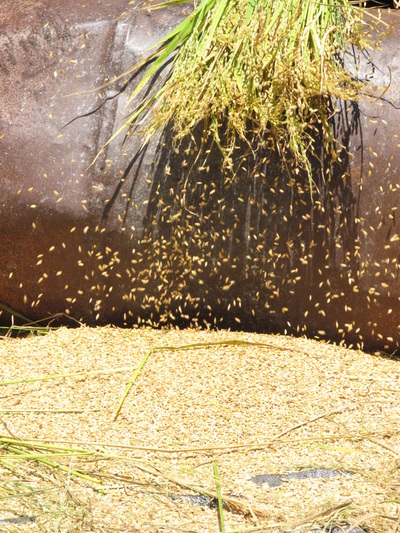 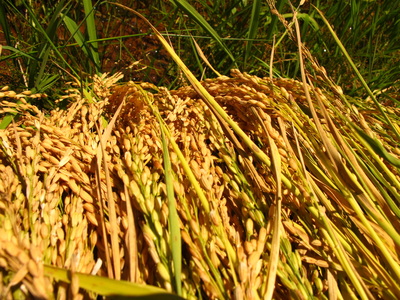