Betampona Natural Reserve is an eastern lowland rainforest with a high level of faunal and floral biodiversity. Similar to other Malagasy rainforest, Betampona has a high diversity of plant species of which 807 have been identified with 18 believed to be endemic to the Reserve (Dina).  Once part of a continuous stretch of rainforest along the east coast of Madagascar, slash and burn agricultural practices have left Betampona an isolated rainforest fragment. 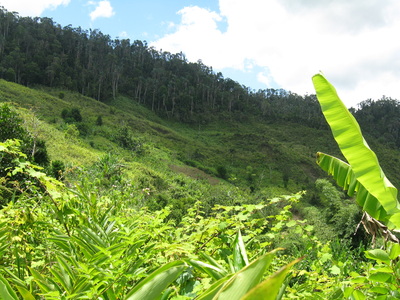 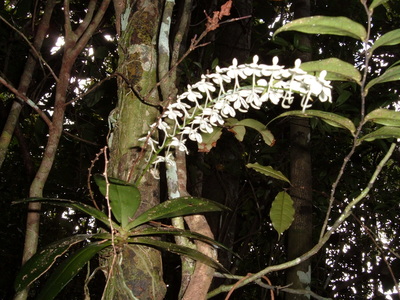 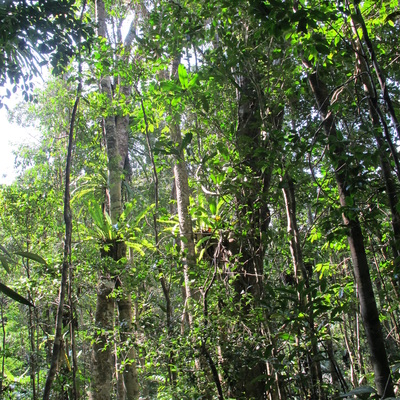 IUCN Guidelines for the Prevention of Biodiversity Loss Caused by Alien Invasive Species, 2002.

"When a potentially alien invasive species is first detected, mobilize and activate sufficient resources and expertise quickly". The guidelines  recommend total eradication whenever possible but warn that  a well designed management plan must be in place because:
"procrastination markedly reduces the chances of success"

The selection of Karen Freeman as Program Manager in 2004 was an auspicious choice.  Prior to joining the MFG, Karen had spent five years in Mauritius where she became acutely aware of the negative impact guava exerts on forests and how extraordinarily difficult it is to eradicate it once it has become established. Consequently, her reaction to finding guava within Betampona was to take action. She began by recruiting graduate students to assess the magnitude of guava as well as Madagascar cardamom and Molucca raspberry.

University of Antananarivo graduate student, Yedidya Ratovonamana’s research, which included mapping the distribution of guava in the Reserve, showed that it was not restricted to the forest's edge but had also spread into areas of primary forest. Yididya also established a series of study plots to examine the effect guava had on natural forest regeneration. His results showed quite clearly that guava prevents the majority of native plant seeds from
germinating. That wild pigs (another invasive species) play a role in distributing guava into the Reserve was confirmed by Yididya’s observations of
guava seeds in their feces and matches reports of feral pigs’ prominent role in seed dispersal in Hawaii, Mauritius and other islands. A separate study on the feeding ecology of white-fronted brown lemurs, Eulemur fulvus albifrons, revealed that not only did social groups living in the secondary forest preferentially feed on guava when it came into fruit but so did groups from the primary forest (Toborowsky, 2007). Many lemur species play an important ecological role as seed dispersers of native flora; unfortunately they can also perform that role for invasives. 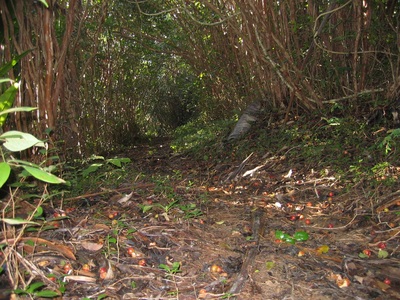 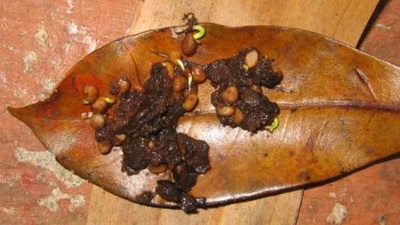 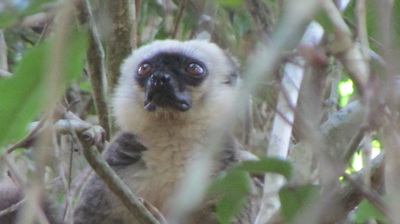 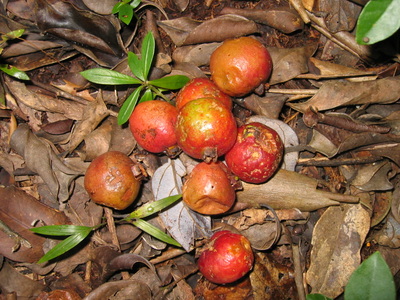 A second graduate student, Bernadette Andrianandraina, evaluated the environmental impact and cost of removing guava through manual weeding.  She established a series of research plots in Betampona’s Zone of Protection and to assess environmental impact she used number and species of animals and ground temperature as her measured variables. Animals were surveyed through pit trap captures.  To obtain the cost of removal she tracked the number of man-hours it took to weed a plot from which a cost/hectare expense was approximated.  Her results showed ground temperatures increased and animal species composition changed both in terms of species and numbers after the plots were weeded; more detailed research is required to interpret these results. The labor cost to weed 150 square meters of guava was 72.00 (based on 2007 pay rates). Karen presented copies of both theses, discussed the implications of taking no action and the need for a detailed study in the Reserve with Madagascar National Parks officials. They clearly recognized the serious nature of the threat to Betampona and approved moving forward with guava  control trials within the Reserve. 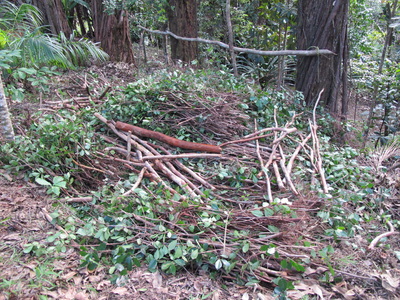 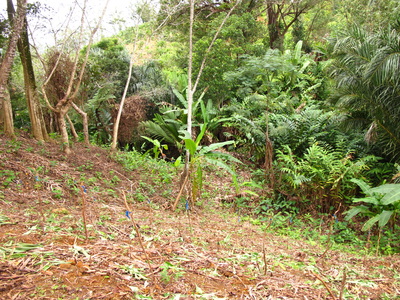 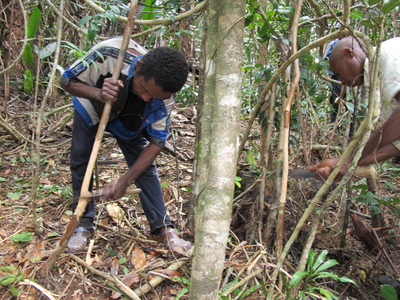 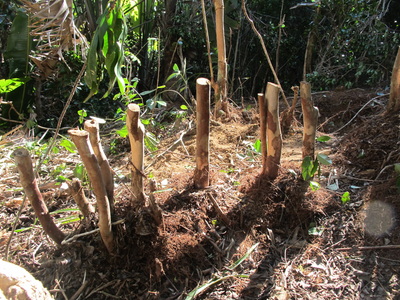 Data on environmental variables were collected before treatments began and for 27 months after treatments  1) Daily: ambient and ground temperature and humidity 2) Soil sample analysis for pH, NPK content, conductivity, infiltration, aggregation stability, organic matter content and texture of a 500 gram soil sample, 3) Monthly pitfall measures of species diversity and relative abundance measures for reptiles, amphibians, small mammals and invertebrates. 4) Vegetation structure of each plot and 5) Monthly standardized of photos of all plots.

All four treatment plots were re-weeded of all regenerating guava plants on a quarterly basis. Once a year native and invasive plant regeneration were measured in a 10m x 10m sub-plot located in the center of each treatment plot. 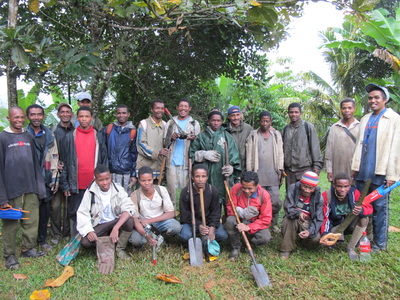 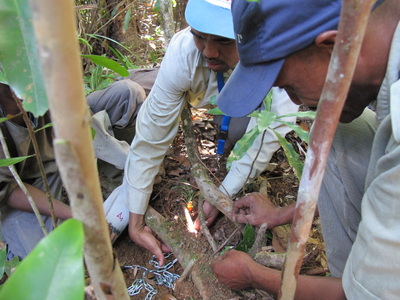 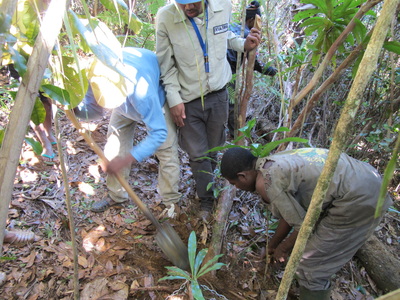 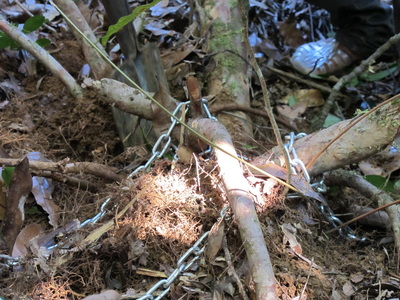 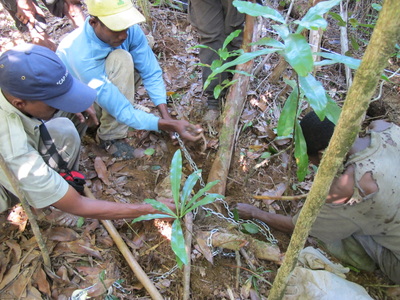 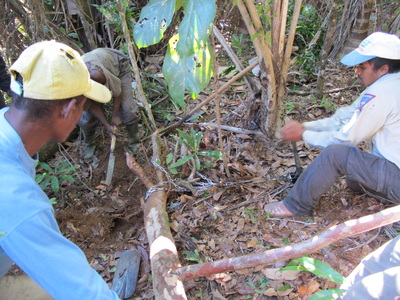 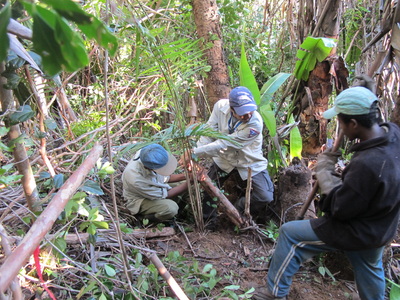 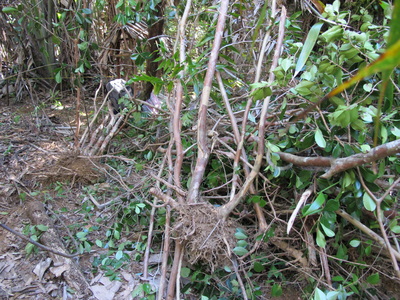 The field portion of Lala's research has been completed and he is currently analyzing the data.  We will report the results of this important work when it becomes available.